Eve and Adam by Michael Grant and Katherine Applegate 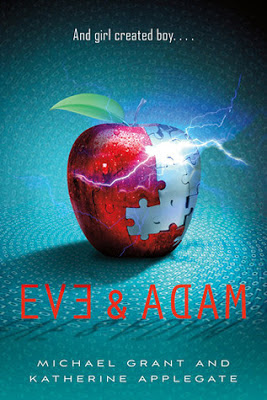 Evening (Eve) Spiker is crossing a street in San Francisco one day when she is struck by a street car and critically injured, severing her leg, breaking ribs and mangling her right arm.With this unique opening, written in the voice of Evening, the novel, Eve & Adam begins.

Eve's mother, Terra Spiker, is head of Spiker Biopharmaceuticals, a research company worth billions. Located on the back side of the Tiburon peninsula across the Golden Gate bridge in San Francisco, Spiker Biopharm is a massive, high-security research facility .

Terra has Eve quickly transferred to her facility, against the emergency room physician's advice. But Terra, with a reputation as an ice-cold bitch won't be refused. Helping Terra transport her daughter, is eighteen year old Solo,whose parents, Isabel and Jeffrey Plissken were her business partners years ago. Terra has given Solo a place to live, an education, and a job at Spiker and he's here this day to help move Eve.

Once Eve is at her mother's facility she begins to notice that she is healing quickly. Solo also notices that within a day, her bruising is completely healed. Seeing that she is bored, Eve's mother assigns her a project; design a human being using a new computer program that allows the programmer to alter genetics and see the effect on the human organism. Eve is somewhat interested but at this time she really just wants the companionship of her best and only friend, Aislin.

Eventually Aislin is allowed to visit Eve. Aislin is a girl who loves a bad boy, Maddox, who is a drug dealer. When Maddox gets into trouble, Eve bails him out by providing him with the money to pay back the people he owes. And Aislin comes to live at Spiker with Eve. She helps Eve with designing her perfect man, whom she names "Adam". As Eve works on her perfect human being, she begins to realize that designing a human being from scratch is an impossible task. What does perfect mean anyways?

Meanwhile Solo is busy gathering information that will expose Terra Spiker and her company for doing illegal research. We don't really know what is going on at Spiker except that it appears to be some kind of illegal genetic research involving transgenetics and possibly cloning.

Solo takes an enormous risk by tricking one of the more brilliant scientists, Tommy, a heavily tattooed scientist at Spiker, into gaining access to his workstation. Solo downloads encrypted files and then passes them along to Eve so that she can know the kind of research her mother's company is doing. Eve is horrified and agrees that her mother must be stopped at all costs.

However, things begin to go awry, when Tommy catches up with Solo and violently assaults him for hacking into his work station. When Eve discovers Solo badly beaten, they along with Aislin realize that they must escape Spiker and get the information on the USB drive to the FBI and other authorities. They barely manage to escape the Spiker complex but then become separated. With the scientists on their track, can Solo send the information to the FBI before being recaptured? And for Eve, is bringing down her mother really the right thing to do?

Overall, Eve & Adam was exciting and fast-paced, keeping the reader engaged and guessing at what might happen next. The first half of the book is the strongest and shows much promise, while the second half of the novel seemed rushed and incomplete (what happens to Maddox? and does Eve ever pay his ransom?). The story is told in the narratives of Eve and Solo and eventually Adam. Both Eve and Solo's voices are appealing with their witty lines and provide the reader with a hint of the conflicts they are struggling with. Eve misses her father, who died in a car crash and doesn't much like her cold, distant mother, who is busy running her research empire in her designer suits and Jimmy Chou shoes. Solo is just that - alone, having lost his parents in a car crash too. There's a hint of compassion, intelligence, and a desire for revenge in him - although we are not sure why. But overall, character development is light as the novel is mostly plot driven. The side story of Aislin and Maddox was distracting and mostly unnecessary. One main point of contention in the novel is the large amount of sexual innuendo that is not funny and mostly just juvenile.

Michael Grant and Katherine Applegate are husband and wife and well known authors who could have produced a much better collaborative effort from this interesting concept. The cover is exceptionally attractive and with the brilliant, well written opening chapter, Eve & Adam will likely draw in many readers. For some, this novel will be disappointing; for others looking for a light, quick read, it will be just what they wanted.