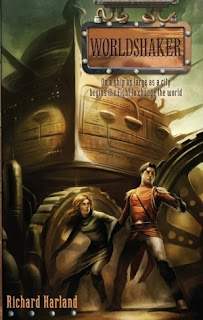 Worldshaker is my first taste of the recently new and popular genre, steampunk. Steampunk is defined as a sub-genre of science fiction and fantasy that incorporates advanced Victorian technology. The stories usually take place in an era when steam power is used and so are often set in the 19th century. Most steampunk fiction like Leviathan by Scott Westerfied,  follow alternate history storylines.
Worldshaker is a juggernaut, a mobile city on rollers. An iron colossus, mechanical mountain, Worldshaker is divided into the Upper Decks inhabited by the elite classes who run the juggernaut society, and the Below, inhabited by the Filthies. It is the Filthies who run the coal-fired engines that power Worldshaker.
It is in this setting that we meet 16 year old Colbert Porpentine, whose grandfather, Sir Mormus Porpentine is the Supreme Commander of Worldshaker. The Porpentine family is one of several ruling families of Worldshaker.
Col's world begins to unravel with the sudden appearance of Riff, a young Filthy who hides in his cabin. Riff was "hooked" from Below to serve as a Menial but she managed to escape. Riff's appearance causes Col to reconsider everything he knows and understands about his world.


"How much did he truly know about Filthies?....In polite society people only ever hinted at the existence of Filthies."

From Riff, Col learns that Filthies are not what he has been told. They can speak and think.


"He had always pictured Filthies as slow and brutish, but not this one." "Fearful images from old nightmares floated before him. Heavy lumbering shapes, hairy unclothed bodies, hideous cannibal faces with leering mouths. Doing thinks, filthiness - he couldn't even imagine the things they might do."

Despite his contact with a Filthy, Col seems destined for greatness when he is chosen as successor to his grandfather, Sir Mormus. That is,until the unthinkable happens to him and he ends up Below, in the world of the Filthies for a brief period. When he is helped back to the Upper Decks in exchange for helping Riff investigate Worldshaker in planning a Filthies revolution, Col finds his world his place in it forever altered. Now seen as "contaminated", Col begins to question Upper Deck life. He asks a friend to research the Filthies.
Although Col's world has decidedly Victorian morals, he learns that beneath this veneer lies an unjust and cruel class system where Filthies are tortured and starved so that the Upper Deck people can live in wealth and comfort.
Eventually the shunning Col and his family experience leads them to take drastic action - one that changes Col's life forever and forces him into an alliance with the Filthies. In the end the revolution succeeds and the story races to a satisfying ending.

Worldshaker is an alternate history story in which Britain was invaded by Napoleon in 1802. Eventually, the French were defeated in the Fifty Years War but mass industrialization brought on by the war led to severe industrial competition between all European states. The labour force needed for the industrialization was eventually enslaved and these people became the Filthies.

Overall, I enjoyed this book and found the steampunk genre to be unique and exciting. The alternate history was fascinating. As Col uncovers the lies his society and his place in it are built upon, he must decide whether he can live with those lies or  whether he must choose a different course. A question remains for me: What happened to Col's wife, Sephaltina?

Email ThisBlogThis!Share to TwitterShare to FacebookShare to Pinterest
Labels: steampunk, YA fiction