Hickman and Smith Cavalluzzo have written an informative and visually appealing book about the internment of Italian Canadians, incorporating personal photographs and testimonies, newspaper articles, historical photographs and many other primary sources. 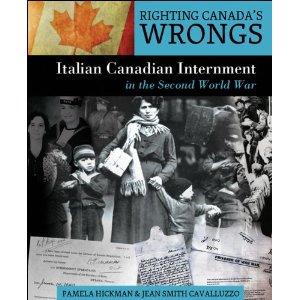 This book provides a very methodical treatment of this topic by presenting first a history of Italian immigrants to Canada. "About 16 million Italians left Italy in the late 1800's and early 1900s to seek better lives." Many left Italy because increased taxes by the government to fund industrial development in the northern part of a newly united Italy, impoverished so many farmers they could no longer survive. These Italian immigrants like my grandfather, Pasquale Caiazzo, were single and young. They came to find a better life in Canada.

It then goes on to describe what life was like for Italian immigrants in the early 20th century. At this time, Canada was very much a homogenous country made up of predominantly British and northern European peoples. Canadian society at this time was not very accepting of the Italian immigrants who were so different culturally. Nevertheless, the Italian immigrants were hard-working, often employed in construction, farming, and mining. They also formed small communities within major cities such as Toronto, Halifax, Montreal and Hamilton. These communities were called "Little Italy" and served to help Italians preserve their warm, vibrant culture.

The authors describe what happened in 1922 when Benito Mussolini seized power in Italy and the country became a one party state - as fascist dictatorship. Mussolini was loved by many Italians because he brought law and order to a deeply divided and impoverished country where rural villages were often ruled by the Mafia.

During the 1930's Italy invaded Ethiopia and adopted many anti-Jewish laws. Adolf Hitler had watched and admired Mussolini for years. When Germany began its acts of aggression against Poland, Austria and eventually invaded France, Italy did nothing. To the dismay of many Italian Canadians, Italy eventually aligned itself with Germany.  Despite the fact that many Italian Canadians pledged allegiance to Britain and Canada, the Canadian government became suspicious of the Italian communities in Canada.

In 1940, after Italy's declaration of war on Canada, Prime Minister William Lyon Mackenzie King ordered that all Canadians of Italian origin  "whose activities have given ground for the belief or reasonable suspicion that they might in time of war endanger the safety of the state or engage in activities prejudicial to the prosecution of the war..." were to be interned.

Many Italian Canadians were treated terribly during the war. Families lost their sole breadwinner when the husband and father was taken away to a prisoner of war camp. Family members often lost jobs. Hickman and Cavalluzzo do an excellent job through the use of photographs, artwork, letters and interviews of capturing what it must have been like for these families. Many men felt they were sent to the camps simply out of spite and racial hatred, due to false accusations.

This book also looks at the effects the Italian internment had on the Italian community, and on individuals after the war was over. Many Italians lost their business, their friends, and were never offered any compensation by the Canadian government.

Based on the experience of my own family I know that Italian Canadians were treated badly during the late 1930s and 1940's.  My mother told me how her older sisters dyed their beautiful black hair blonde or red, changed their last names so that they could get work and how her parents refused to speak Italian in public. 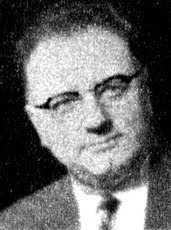 If Italian Canadian Internment in the Second World War is missing anything it is the forgotten contribution of one Italian Canadian --  Quinto Martini, who happens to be my uncle and who was the first Italian Canadian elected to Parliament. My Uncle Quinto was involved in organizing textile labour unions in the city of Hamilton before the war. Quinto was arrested and interned during the Second World War mainly because he was Italian and also likely due to his labour activism. This despite having signed a declaration stating that he was faithful to the British government.

Quinto Martini was POW #720 and his record can be found here in a list of internees.Nicholas Zaffiro, who was interviewed for this book knew Quinto Martini through the Sons of Italy. Quinto Martini passed away in 1975. Quinto's internment caused considerable hardship for my Aunt Lucy who was expecting her third child that fall. With no money to support herself, a newborn and two small children, my Aunt Lucy was forced to go on welfare.

Following the Second World War, Quinto joined the Progressive Conservative Party and after a first unsuccessful bid, was elected to the House of Parliament, in 1957, representing Hamilton East, thus making him the first Italian Canadian elected to the House -- something I consider important enough to have merited his inclusion in Hickman and Cavalluzzo's book. During his second term, he served as parliamentary secretary to the Minister of Transport.

Italian Canadians as Enemy Aliens: Memories of World War II.
Posted by About me at 10:51:00 PM

The pattern of arrests and imprisonments in the Italian Canadian community clearly focused on community leaders and activists. That is evident in retrospect; at the time, the people arrested didn't necessarily see the pattern. As the video interviews on the Columbus Centre's internment website show, many of those directly affected felt guilt and shame -- they or their family members had been judged disloyal by the state, even though there was no actual basis for that judgment. Greater awareness and understanding of the practice of authorities when they consider that the state could be threatened would have made the logic of the internment more understandable -- though not more justified.

Hopefully, understanding actions against groups and communities by the state in the past will help understand when this pattern is repeated in the future.

I worked with Sid Martini a nephew of Quinto.He told me the story back in the sixties.As bad as it was for the italians,the japanese had it worse.War does crazy things to people.Canada is very lucky to have Italian and Japanese immigrants.We are also lucky to have all our past and present immigrants.Larry lanigan