Climbing the Stairs by Padma Wenkatraman is a novel set in British-occupied India during the Second World War. The plot revolves around Vidya and her family who live in Bombay. They are of the Brahmin caste and are wealthy, with Vidya being driven to school every day in the family's Austin. 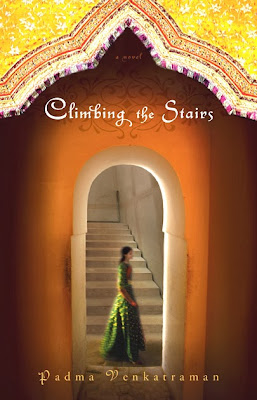 When her father is seriously injured in an Indian demonstration against the British, the family's fortunes take a downturn and Vidya, her brother Kitta and her mother must go to live with relatives in Madras, who live a more traditional way of life. This traditional way means that women live separately from the men, with the women living on the first floor and men on the second floor of the home. But it is on the second floor that Vidya learns there is a library - a place she as a woman, is not allowed. Hence the book's title, Climbing the Stairs. Raman, a young student living with Vidya's aunt and uncle, helps Vidya obtain permission to use the library and soon a strong friendship develops between the two.

Vidya also begins to assert her strong will and pursue what she wants in life - to be educated. Against the backdrop of World War II, it is world events that help bring about the climax of this story.

Climbing the Stairs is well written and engaging. Readers will be able to develop a sense of the culture of India, especially with regards to the food, dress and customs, but not a good understanding of what Indian society was like during the war years and near the end of the British occupation of India. The lack of a glossary is somewhat frustrating as Indian terms are used throughout the book. In some ways, the book ended too abruptly for me. Several situations were resolved too quickly and without much depth. 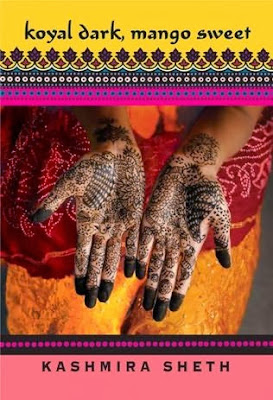 A second novel, "Koyal dark, mango sweet" was much more interesting and enjoyable. The story revolves around Jeeta and her family's attempts to marry off three sisters (including Jeeta). Set in modern-day India, the novel opens with Jeeta's family desperately seeking a groom for their eldest daughter, Nimita, who has a serious eye condition. There are interesting descriptions of the family searching through the "matrimonial pages" in search of a suitable husband, followed by the readings of horoscopes and a first meeting. After enduring meeting at least seventeen young men, finally a spouse is found for Nimita - a good young man, Girish Mehta, from a nearby orphanage.

Next in line is Jeeta's sister Mohini. It is during this time that Jeeta meets Sarina, a young classmate whose mother is a lawyer and whose father is a judge as well as a young man named Neel. Sarina has a strong, positive influence on Jeeta. She widens Jeeta's perspective on what she can obtain in life through education. Until she met Sarina, Jeeta looked forward to marriage at a young age with little chance to see the world and participate much in it. As for her growing friendship with Neel, Jeeta must keep this a secret, because any contact with members of the opposite sex outside of family, is strictly frowned upon.

The descriptions of Indian rituals and food, the various religious festivals and customs, the type of dress and descriptions of places make this novel more interesting and help the western reader develop a sense of India. Indeed some of the chapters are named after Indian festivals and there is also a glossary at the back of the book to further explain Indian terms used throughout. As with "Climbing the Stairs" the title, Koyal dark, mango sweet also has significance, which I leave the reader to discover for themselves.

Koyal dark, Mango sweet by Kashmira Sheth
Hyperion Paperbacks, 2006
Posted by About me at 8:09:00 PM No comments:

One Thousand Tracings. Healing the Wounds of World War II 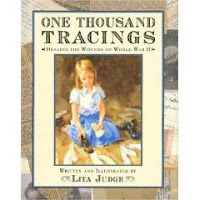 Written by Lita Judge, One Thousand Tracings is a fascinating picture book inspired by events in the lives of the author's grandparents. The book jacket and the inside of the front and back covers are a montage of photographs, foot tracings, envelopes and letters from Germany listing the needs of post-war families.

The picture book is set up so in a somewhat diary form commencing with December 1946 with the entry "Papa Came Home" and follows monthly until September 1947 when the entries become further spaced apart. Each entry tells about a little girl and her family and how they first help friends overseas in need of shoes. These friends, the Kramers are so touched by the generosity of their American friends that they suggest they help other German families worse off and send tracings of their feet so that suitable shoes can be found. Soon thousands of foot tracings arrive.
Each entry is beautifully illustrated with exquisite water colour drawings which convey the emotions felt in each entry. There are also various photos accompanying some entries which show items sent overseas.
I thoroughly enjoyed this book. I learned something new about the post-war period and it was interesting to read about the authors connection to the story portrayed in the book.
Highly recommended.

Book Details:
One Thousand Tracings. Healing the Wounds of World War II
Written and Illustrated by Lita Judge
Hyerion Books for Children, 2007
Posted by About me at 10:10:00 AM No comments: The Occupied Garden: Recovering the Story of a Family in the War-Torn Netherlands by Karen Den Hartog and Tracy Kasaboski is a compelling read filled with both tragedy and hope. Written by sisters Karen and Tracy, this book details the Den Hartog family life commencing immediately prior to the start of World War II and throughout the occupation of the Netherlands by the Nazis. The book opens with the marriage of their grandparents,Cor and Gerrit den Hartog and their establishing a home and market garden.

The Occupied Garden tells the story of Cor and Gerrit as they struggle to raise their young family amid the Nazi occupation and pillage of the Netherlands. Cor, deeply devout tries to understand why God would allow such suffering. Other members of the family are also affected, each in their own way, despite Cor and Gerrit's attempts to protect them.

An unexpected tragedy, the family's resilience in the face of their own and their neighbour's terrible suffering make this story both poignant and tragic. The authors also tell the story of the Dutch Royal Family's sufferings during this time.

Book Details:
The Occupied Garden: Recovering the story of a family in the wartorn Netherlands
by Kristen Den Hartog and Tracy Kasaboski
Toronto: McCelland & Stewart 2008
328pp
Posted by About me at 12:28:00 PM No comments: