These are books that I have read and reread countless times. Some of them are classics that are well known. Others are not so well known. I won't be reviewing them here or discussing them in any great detail. But I will try to post a cover and maybe a short synopsis. 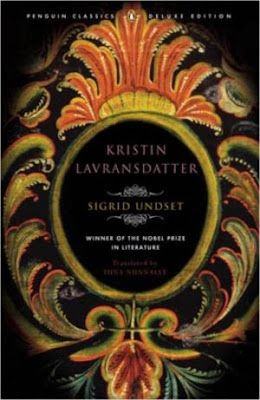 Kristin Lavransdatter tells the story of one woman's life from the time of her youth until her death in middle age. Set in 14th century Norway, the novel is divided into three books, The Wreath, Husaby, and The Cross. Kristin has a deep warm friendship with Arne Grydson, a  farm boy she has known throughout her childhood. However, when Kristin is fifteen years old her father betroths her to the more suitable Simon Andresson, a twenty year old man.

One evening she agrees to meet Arne on the road south of Laugarbru as he is leaving town. For the first time they acknowledge their love for one another and the impossibility that they could even marry. On the way back from meeting Arne, Kristin is accosted by Bentein Presteson who is drunk. Realizing that he intends to rape her, Kristin struggles free and escapes to Bentein's mother's house. Gunhild, Bentein's mother, washes and repairs her clothing and Kristin returns home.

However, weeks later Kristin and her family learn that later Bentein killed Arne in a drunken fight in Oslo. Kristin is devastated. Despite that fact that Bentein did no physical harm to Kristen she feels defiled and shamed. At Arne's funeral, his mother Inga spreads the rumour that Kristen allowed both Bentein and Arne to touch her suggesting that Kristin is responsible for Arne's death and that she is a woman of ill repute. Her father decides to sends her to the cloistered sisters at Oslo, to live at Nonnester for a year so that the rumours might die away.

One day at Nonnester, Kristen and and another lay woman, Ingebjorg, are allowed to accompany Sister Potentia shopping in Oslo. When a disturbance breaks out the two girls become lost in the woods. The two girls are accosted by robbers but are saved by Erlend Nikulausson of Husaby. When Kristin thanks him he is shocked to learn that Kristin knows his kinswoman. They meet a second time months later when the abbess and several older nuns take Kristin to the Farmers' Guild at Aker for the Saint Margareta celebrations. It is at Mass where she once again meets Erlend Nikulausson. Erlend's aunt once told Kristin that she was no match for Erlend because her family's ancestor was an outlaw and foreigner in Norway. However, Kristin and Erlend are drawn to each. Smitten with each other they manage to meet secretly many times. Their fateful encounter and Kristin's willful choice to live her life against her father's advice will have life long repercussions for both themselves and their families.