I am Number Four by Pittacus Lore 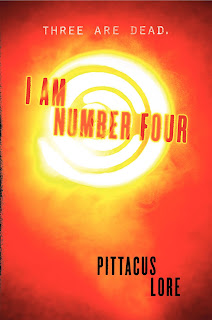 I am Number 4 opens with “John” on the move again. He fled his home planet Lorien when he was almost too young to remember in an attempt to escape a devastating surprise attack by the dark, evil Mogadorians. The Mogadorians attacked Lorien to rape it of its resources and take the planet for themselves. In an attempt to save what was left of their race, the Loriens sent 9 Garde children and their Cepan guardians to Earth to regroup, mature and come back to retake their homeland. However, their plan was discovered and the Mogadorians pursued the Loriens to Earth.

The nine Lorien children dispersed thoughout Earth. A charm had been placed on all 9 guaranteeing that they can only be killed in the order of their numbers. If they come together the charm is broken. When one is killed a circular scar wraps around the right ankle of those still alive. The first scar came when John was 9 years old. There have been two more scars as Number 2 and Number 3 have been hunted down and killed by the Mogardorians. John is next, hence the title of the book.

“John Smith” and his guardian, Henri are moving to Paradise, OH. At first John has trouble fitting in at the local high school. It’s important that John blend in and remain unremarkable but things just don’t work out that way. There are confrontations with Mark James, the son of the local sheriff and the ex-boyfriend of Sarah Hart who begins to develop a crush on John. Besides trying to fit in, John must cope with the development of his first “legacy” or special power, his growing feelings for Sarah, and his desire to settle down somewhere.

Their lives are permeated by the “cat and mouse” games that they must play in order to outwit the Mogadorians while remaining simple human folk to the inhabitants of Earth. John's cover is finally blown when disaster strikes at a party he and Sarah attend. And from this point on, events develop to the final breathtaking and heartbreaking confrontation.

I am Number Four is suspenseful and definitely a page-turning read. There's no doubt that I very much enjoyed this book for that reason. Author, Pittacus Lore (who it turns out is the disreputable James Frey and newbie Jobie Hughes) gradually reveals the details behind Lorien’s demise and the escape of the nine Lorien “Garde” who have come to Earth. These details are fascinating and fill in periods where there is less action in the story. While details about John’s life are missing, we get a sense of what life was like on Lorien from John’s flashback dreams of his early life and also through Henri’s eyes.

I have several complaints about the book though. 15 year old John is remarkably assured and confident for a teen, and an alien teen living on a strange planet! His relationship with Sarah has no depth to it, naturally because he’s only known her for a few months and yet he seems incredibly set on loving Sarah and staying with her even when Henri tells him it’s not the way of Loriens who love completely for life.

The book itself seems to have been written as movie script first and as a novel. And in fact, I am Number Four is being made into a movie:

At times the action seems paced as though the writer is envisioning how the action might play out on the big screen. I am Number Four is one of those books that could be made into a very good movie or it could be a monumental flop.

There is also the similarity to the Superman storyline - a superhero who can run fast, fly and is impervious to heat. Pittacus Lore covers himself by indicating at the very beginning that Lorien's are like the superheros that humans admire and dream about. There are also a few cheesy onliners in the dialogue.This is sci fi, after all!

Still, for young adult science fiction fans, I am Number Four promises to be an exciting new series.
Posted by About me at 7:03:00 PM No comments:

Queen of Hearts by Martha Brooks 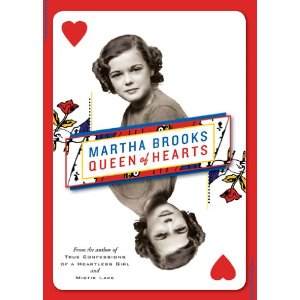 Queen of Hearts is a coming of age story set in the 1940's when tuberculosis and TB sanatoriums were a significant part of twentieth century life. Marie-Claire Cote is a headstrong 15 year old who contracts TB from a beloved uncle. She is sent "chase the cure" at Pembina Hills San along with her younger brother and sister who have also become ill with TB. At Pembina Hills she is placed in a room with Signy, a young woman like herself but whom she finds annoying and needy. Signy has been at the San for years now and has suffered through many different procedures in an attempt to beat her TB. All Marie-Claire wishes to do though, it to get out of the San and get on with her life. In typical teenage ways, she doesn't care much about Signy, who has been abandoned to the sanatorium by her wealthy parents.  Marie Claire discovers that the sanatorium has a life all its own, with patients who marry and people who are cured who come back to work there. She gradually understands that she must learn to be a "patient patient". During her time there, Marie-Claire begins to mature and even falls in love.


This book provided a fascinating glimpse into a era that passed away only a decade before I was born. I remember asking my parents about the local sanatorium with its huge windows. This era ended with the widespread use of antibiotics which cured TB.
I have to say that throughout most of the book the character, Marie-Claire was not a likeable one. In fact, I had most decidely disliked her but then suddenly she grew up and seemed to change at the end. This was reflected in her decision at the end of the book which redeemed her in my eyes.

I'm not sure how attractive this book will be to ordinary teen readers, but those who like historical fiction will enjoy this short Canadian novel by acclaimed author and playwright, Martha Brooks.
Posted by About me at 9:40:00 PM 1 comment: