The case of the missing servant

Vish Puri (also known as Chubby) is the Punjabi equivalent of Hercule Poirot. Described as stout (he needs to lose thirty pounds) and a “self-confessed master of disguise” with a military moustache waxed and curled at the ends, Puri runs a thriving private investigation business in New Delhi, India.

Puri, who has a penchant for scorching hot chilies, has nicknames for most of his employees (Tubelight, Facecream and Handbrake). His devoted wife Rumpi and his mother, Mummy-Ji are delightfully real life characters.

Ajay Kasliwal retains Puri to investigate the disappearance of his servant, Mary. Kasliwal is a lawyer residing in Jaipur and Mary’s disappearance has everyone talking. Puri’s task is to locate one missing female maidservant out of India’s population of one billion.


Alternating between Puri’s investigation into Mary’s whereabouts and his “Pre-Matrimonial Five Star Comprehensive Service” investigation into Ramesh Goel, the potential husband of Vimi Singla, Hall weaves an engaging delightful story. The story leads inevitably to its final climax with the solving of both investigations and the promise of more Vishi Puri cases in the future as hinted by the secondary plot involving an unsolved attempt on Puri’s life.

Hall’s dialogue is both humorous and rich with Punjabi influences and his descriptions of life and people are vivid as Puri travels from various locales in New Delhi to Jaipur, the Pink city and to the remote uranium mines of Jharkhand.

“Horns blared constantly, a clamour as jarring as a primary school brass band. Loudest of all were the Blueline buses. Driven by charas-smoking maniacs who were given financial incentives for picking up the most passengers, even if they ended up killing or maiming some of them. ‘Bloody goondas,’ Puri called them.”

This is a mystery with a different flavor and will definitely appeal to those who like a light read that includes an exotic cultural flavour. To aid in the latter, The case of the missing servant has a glossary at the back for the many punjabi words used throughout the book.

The case of the missing servant by Tarquin Hall.
Meet Vish Puri, Most Private Investigator. 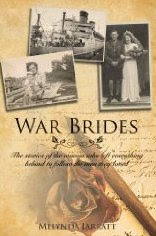 War Brides. The stories of the women who left everything behind to follow the men they loved by Melynda Jarratt provides younger women like myself wonderful insight into exactly what it was like to leave everything familiar and come to another country - all for love.

When Canada joined Britain in its declaration of war against Germany on 10 September 1939, the last thing on anybody's mind was marriage.
But less than forty days after the First Canadian Infantry Division landed at Greenock, Scotland, on 17 December 1939, the first marriage between a British woman and a Canadian soldier took place at the Farnborough Church in Aldershot on 28 January 1940. That marriage, and the nearly 48,000 which followed over the course of the next six years, formed one of the most unusual immigrant waves to hit Canada's shores: all women, mostly British, and all from the same age group, the story of the Canadian War Brides of the Second World War is one worth telling.

While the book which is mostly the stories of many war brides who settled in different regions of Canada, such as Ontario, the Maritimes and so forth, there are also chapters which focus on specific aspects of the war brides. There is a chapter devoted to the unique issues of faith and language differences war brides of French Canadians encountered. Jarratt also has a chapter of the stories of the war widows of Canadian soldiers, and on war fiancees - that is, women who were not yet married to their Canadian soldiers when they arrived in Canada.

What I hadn't anticipated is the fact that many of these stories are a testament to the resourcefulness, resilience and courage of war brides, many of whom were not accepted by their husband's families and communities and many who struggled mightily with the huge cultural differences they encountered when they arrived in Canada. Many British war brides came from communities that had running water and inside toilets and arrived in Canada to find living conditions, particularly in rural areas, very primitive at best. Some found the isolation to be overwhelming.

There are many stories of women who came to Canada and never looked back. Though these women were homesick at times, they were warmly welcomed and had happy productive lives and long happy marriages.

War Brides has an extensive bibliography with listing of primary and secondary sources as well as various summary tables on marriages and births for Canadian servicemen serving outside Canada during WWII. There are photographs of the war brides and maps.


Book Details:
War Brides. The stories of the women who left everything behind to follow the men they loved.
By Melynda Jarratt