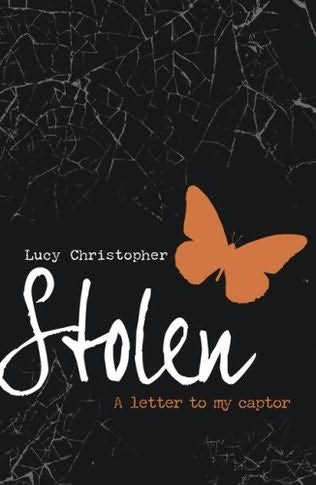 You saw me before I saw you.

While waiting in the airport at Bangkok with her parents to board a flight to Vietnam, 16 year old Gemma Toombs meets Ty. He seems strangely familiar, though Gemma can’t quite place where she might have seen him. After he buys her a coffee, Gemma begins to feel strange and soon she finds herself in a drugged haze. When she wakes days later, Gemma is alone with Ty, in a wooden house in the middle of a desert.

Gemma tries to escape but soon realizes that she has no way out. Surrounded by miles of burning, red desert, and totally dependent upon Ty, she continues to resist his attempts to win her confidence and her love. As the days pass, Gemma learns about her captor’s past and his intentions for the future. She learns just how much planning went into her capture. Throughout most of her ordeal she continues to resist until finally Ty strikes a bargain with Gemma. But just as she’s beginning to see Ty differently, fate intervenes.
Discussion

Stolen is a remarkable book written as a letter from a victim to her captor. Through most of the book, Gemma struggles to understand her captor and his motives. Her character is realistically drawn – she’s not perfect and has her typical issues with her parents and peers. Ty, although creepy is not sinister. He seems more like a misguided soul, struggling to find a place for himself.

Lucy Christopher manages to hold the reader’s attention throughout with a series of events that create suspense and leave the reader wondering how the situation will be resolved. Will Gemma eventually escape, will she grow to love Ty or will something sinister happen?

The book also offers the reader a chance to explore Stockholm syndrome – the paradoxical condition where victims of intense emotional trauma see their perpetrators in a positive way. This part of the book was probably the most interesting to me.

I highly recommend this book. Stolen offers a unique storyline among a series of books that have recently touched on a similar theme and it has a more positive ending than Living Dead Girl.

Email ThisBlogThis!Share to TwitterShare to FacebookShare to Pinterest
Labels: kidnapping, stalking, YA fiction

A mountain of crumbs 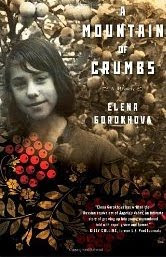 A mountain of crumbs details life in Soviet Russia in the 1960's to 1980 when the author left her homeland for America. I truly enjoyed this memoir mainly because I felt that Elena was able to reach across language and cultural differences and convey the character of her family and friends and of Soviet life, with startling clarity.
Since I grew up during the same time period as Elena, I think the West's understanding of what life was like in the Soviet Union was accurate in a general way. However, it was the culture of vranyo - pretending, which maybe caught me by surprise. I enjoyed Gorokhova's wit in conveying the sometimes remarkable culture of pretend that extended throughout Soviet life.
"All this Communist delirium about paradise on Earth and equal labor. They pretend they pay us, and we pretend we work."

There are remarkable descriptions of life in the summer at the family dacha, of her father's fishing trips in the Gulf of Finland and a memorable time mushroom hunting. But there are also haunting descriptions of life under communist rule: her father dying alone and at a relatively young age in a hospital, the school doors locked forcing children to attend Young Pioneer meetings, the long lines to obtain simple necessities of life, apartments shared by several families.
As Elena works her way through the Soviet system and as she becomes more disillusioned, she realizes that the only way to have a life on her terms is to leave Russia. But no one gets out of Soviet Russia easily in 1979. And the final decision is fraught with doubts and concerns.
Eventually, Elena with the help of an American is able to leave Russia by the way of a contrived marriage.
I wish the book had continued on to tell us of her initial impressions of the West. Perhaps another book?

I highly recommend this memoir and I hope to read more of Elena in the future.
Elena Gorokhova currently authors a blog as part of her website. The website hosts interviews and photos of Elena. It is wonderful to hear her voice and see more recent pictures of her and her family. The video below is one which can be found on Elena's website: