With the close of November, the month we remember our dead and in a special way, our war dead, I thought I'd review a few books I've read lately.

Age 14 is a searing, heart-rending account of a 12 year old Irish boy who ran away from home to become a soldier, only to find himself thrust into the bloodbath of World War I.

This novel is based on the unsubstantiated story of a Patrick Condon from Waterford, Ireland who possibly swapped names with his older brother, John and joined the Second Battalion Royal Irish Regiment and was mobilized in April 1914 at the age of 13. Spillebeen wrote his novel in 2000 and since then much discussion continues as to the veracity of the John Condon legend. (See Campaign for War Grave Commemorations)

Despite this, Spillebeen effectively captures the naivete of young John Condon who sees war as adventure and thrill. Nothing seems to be able to dampen young Condon's enthusiasm for war, not even meeting a seriously injured and disfigured British soldier, only weeks before he travels to Belgium.

The novel's poignant descriptions makes the reader wonder at the futility of thousands upon thousands of men dying for mere inches of ground. Through Tom Carthy, John's elder companion by 30 years, we are given a sense of forboding for not only these two characters but for all the soldiers going over to France and Belgium to fight "the war to end all wars". He is the foil to John Condon's naivete, youth and feelings of invincibility. We KNOW how it ended.

Carthy also laments the destruction of the beautiful historic towns and cities of Europe, pointing out the incomprehensible loss of heritage when the two soldier's arrive in Ypres and see the "grievous traces of the German artillery".

The climax comes with the German gas attack on Ypres, May 24, 1915. Spillebeen chronicles the German experiments with chlorine gas before the attack and provides historical notes at the end of the novel on Fritz Haber, inventor of the chlorine gas warfare, and unbelievably, the winner of the Nobel Prize in Chemistry for his work on the Haber-Bosch process which allowed for the mass production of ammonia and thus artificial fertilizer.

This book is well written,short, and guaranteed to hold the attention of juvenile and teen readers.


Second up, is a novel about a young boy from World War II, The Boy Who Dared, by Susan Campbell Bartoletti.
This book, although a work of historical fiction, tells the story of Helmuth Guddat Hubener who was executed by the Nazi's at the age of 17 for treasonous support of the enemy.
Told in flashback, Bratoletti explores the life of Helmuth who was only eight years old when Hitler came to power in 1933. Helmuth's mother, Mutti divorced his half-brother's Han and Gerhard's father and never married Helmuth's father. His family lives next to his mother's parents. At first Helmuth, like many young boys in Germany, is willing to fight for a Germany under the leadership of Adolf Hitler. He hangs on every word uttered by Hitler all the while being puzzled by his Opa and Oma's fear of Hitler. Helmuth doesn't understand why many of the adults in his life are disagreeing over Hitler's plans for revitalizing a demoralized Germany. Gradually however, as Germany begins to ostracize and terrorize it's Jewish citizens, Helmuth grows more and more uncomfortable,

....But all the things Herr Zeiger says about the Jews feel terribly wrong. Unease crawls over Helmuth.
Herr Zeiger glares at Benno and lowers his pointer, aiming it like a sword. "You see, class, Jews are traitors who want to destroy Germany. And what does the Jew Seligmann say to that?"
This shocks Helmuth. Benno Seligmann and his family, traitors? How can that be?...

Eventually, actions against the Jews increase, with even school children being indoctrinated in anti-Jewish hatred. When Mutti becomes romantically involved with Hugo Hubener, an SS Rottenfuhrer, Helmuth begins to question Nazi policies. Hugo represents the arrogant, hateful Nazis and Helmuth cannot understand what his mother sees in this man. Mutti has told him that people sometimes get on (cope) by being silent. Eventually, Helmuth decides that he can no longer be silent against the Nazi regime, with terrible consequences. In the end we learn just how truly brave Helmuth Hubener really was.

The mood of The boy who dared is dark and suspenseful. The reader knows what the book is leading up to, it is the filling in of the reasons why that matter. The suspense is relieved only by the fact that we know how the war ended and that Helmuth's sacrifice was not in vain. "Helmuth feels something. His chest swells. A warm calmness fills him, and he knows that he has lived a life that stood for something."

The back of the book contains a map of the borders of Europe in 1936, photos of Helmuth and his family, a Third Reich timeline, a bibliography for further reading, and a detailed Author's Note in which we learn what happened to Helmuth's friends and family during and after the war.

Highly recommended for Gr's 5 to 9.

Barnes and Noble's Steve Bertrand interviews Jay Asher, author of Th1rteen R3asons Why. Some interesting insights into how Asher came to write this novel.

Th1rteen R3easons Why by Jay Asher 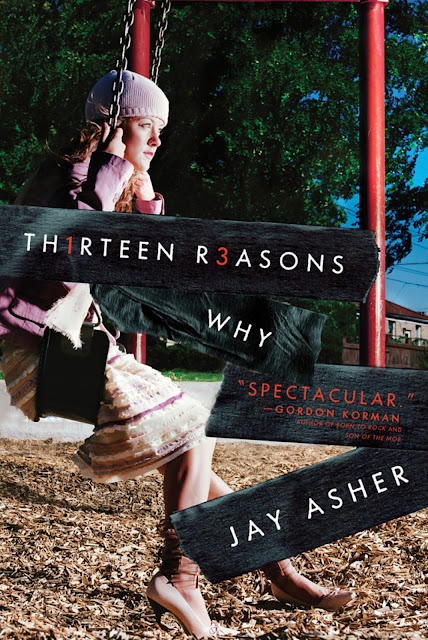 Hannah Baker killed herself. When Clay Jensen receives a box of tapes in the mail, he is stunned to hear Hannah's voice on them. Before her death Hannah made tapes covering 13 sides of cassettes because there are "13 sides to every story". Hannah recorded these tapes and has sent them to the people she considers responsible for her suicide. The rules are that each person listens to all the tapes and then passes them onto the next person. If the chain is broken there is a second set of tapes which will be publicly revealed.

Thus begins Jay Asher's unusual novel about teen suicide. The novel opens with Clay Jensen, the ninth person to receive the tapes, mailing the tapes onto the next person. What follows is a narrative in Clay's voice of his experience listening to all the tapes, juxtaposed with Hannah's voice on the tapes - a dual narration.

We see how Hannah fails to cope with situation after situation in her life; failing to make close friends or developing a support system both at home and at school. She pushes people away, when she either has the chance or is offered the chance for help and support. It's a recipe for loneliness and disaster.

There are lots of ideas for teens to consider in this novel, making it a great book for a teen group discussion. Possibilities include to what degree are we responsible for friends; signs that someone is contemplating suicide, what teens can do to help a friend in trouble and so forth.

A sad but thoughtful novel that is sure to engage teens on a difficult subject.

From Michael Stephen's blog, Tame the Web, his dissertation on blogging:

Stephens Mfinal
Posted by About me at 1:52:00 PM No comments: