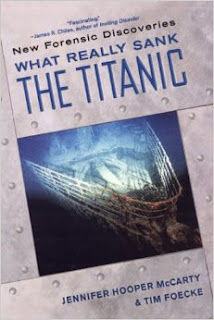 Initially, I took this book out to read the last few chapters, expecting that it would be dry and very technical. While it was very detailed and technical, this book was completely engaging after the first chapter. It's a credit to the writing skills of authors Jennifer Hooper McCarty and Tim Foecke that they can make wrought iron, cast iron, steel and rivets so interesting!


The first chapter provides a background of the luxury shipliner business as it existed at the turn of the last century and places it within the context of major scientific and industrial discoveries (namely, the Marconi wireless and changes in material from wrought iron to steel) of the period. The book reads like a major thesis and progresses logically with the authors stating their thesis in the preface, that


"substandard materials used in some of the riveted joints of the ill-fated liner caused the first six compartments to flood after the iceberg impact and allowed the largest man-made moving object of the time to sink in a little more than two hours on that night in April 1912."

What Really Sank the Titanic is divided into four parts comprising the background, the facts of the sinking and the investigations undertaken over the past 80 years. the analysis of material from the Titanic and the final part which discusses other interesting facts as well as the current state of the wreck.

McCarty and Foecke's presentation is logical, easy to understand, and the book is completed with colour plates and diagrams to aid the reader's understanding. A good read for those not saturated with Titanic information and who want something "authoritative" and new to read on this subject.

Book Details:
What Really Sank The Titanic by Jennifer Hooper McCarty and Tim Foecke
Citadel Press   2009
320 pp.
Posted by About me at 2:34:00 PM No comments: