Karma is telling of an Indian tragedy, both personal and national. 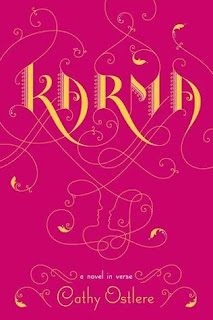 Jiva, a fifteen year old half-Hindu, half-Sikh lives in Elsinore Manitoba. She is the only child of Amar(Bapu), a Sikh and Leela, a Hindu, born July 20, 1969, the exact date and time man walked on the moon.

Years ago, Jiva's parents, Bapu and Leela, met and fell in love back in India. They both married against the wishes of their families. Bapu's family requested that their son force Leela to become a Sikh, while Leela's family disowned her. To escape the pressure from their families and to have a life together they emigrated to Canada. Jiva is their only daughter.

However, things do not go well in Elsinore. They are the only non-Christians and are very isolated. This is especially difficult for Jiva's mother whom she calls Mata. To escape her loneliness and increasing depression Leela plays piano for hours on end. Leela begs Bapu to take her back to India. But Jiva's father who runs Jack's Mechanic Shop refuses telling her that his mother will treat her badly and that in Canada they are free to be who they want to be.


But we're not meant to live so alone.
Perhaps even hatred is better than
this isolation, Amar.

Hatred is a form of isolation,
Leela. Look around at this
country. These rivers. These
fields. These deep blue skies.
There's peace all over this land.
No blood in the soil to stain our
lives. No families to tell us how to
be.
It's not home.

As time passes Leela becomes more and more depressed and eventually commits suicide. It is Jiva who finds the body of her mother hanging in the family home. Her father decides to return to India with Leela's ashes. Jiva and her father are newly arrived in Delhi, India on October 31, 1984 when they learn that Indira Gandhi, Prime Minister of India, has just been assassinated by her two Sikh bodyguards in the garden of her house. Soon chaos descends upon Delhi, with Hindus rampaging throughout the city murdering Sikhs who are easily recognizable by their colourful turbans and beards. When Bapu disappears after leaving Jiva to try to find a way out of the city for them, Jiva is placed in great danger. She decides to flee the hotel they are staying at and ends up taking a journey that leads her to witness a horrible event. This event is so traumatic that Jiva stops speaking and is taken in by the family of a woman doctor who treats her in Jodhpur. While staying with this family she gradually falls in love with the adopted son, Sandeep who helps her to get well emotionally and to reunite with her father.

Karma is told first in the voice of Jiva and then when Jiva can no longer speak, in the voice of Sandeep. When Jiva begins to heal, Jiva's narrative returns. Karma is written in diary form and in free verse.

Overall I enjoyed the story told in Karma but there were a few things I didn't like. I felt that the middle part of the book where Jiva and Sandeep are taken into the desert to be a very odd plot twist that just didn't work for me. I felt it didn't fit into the overall story line. Although I enjoyed the character Sandeep very much, I thought his writing a diary was also odd. Teenage boys writing diaries? I'm not so sure about that, although the author handles this well by having Sandeep address this actual question in the opening entries of the diary. Nevertheless Sandeep was humorous and I loved how he was attracted to Jiva and behaved honourably towards her. Sandeep was sweet and showed that he was deeply concerned about Jiva, which I felt endeared him to the reader.

The other drawback to this book is its length - a huge chunky book of 517 pages which may or may not deter even the most enthusiastic teen readers.

What I did enjoy was how Cathy Ostlere really captured the terror and chaos of this period in India immediately after Gandhi's assassination. I remember Gandhi's murder because I was in graduate school at the time. Strangely, I don't remember reading about the murder of Sikhs and Ostlere seems to indicate that many Indians remained in collective denial about the massacre of Sikhs afterwards. The fear Jiva and her father would have felt was brilliantly portrayed in Ostlere's free verse. Her poem Mirage, providing an account of events leading into the trauma Jiva experiences on the train out of Delhi en route to Jodhpur is one such example.

They come across the yellow fields
running with dark faces and teeth bared
through ribbons of heated air
a mirage of false water.

The train slows as if waiting for them to catch up.

What's happening here?
Why are we stopping here?
Is it wolves?

But they are not wolves


(we should have prayed for wolves)
but men instead
four-limbed and angry
carrying iron rods and knives
hands gripping gasoline cans
voices shouting into the hot dry air
their fury stirring the dust like a wind.


(we should have prayed for wolves)...


I enjoyed this book but it's certainly for those who love reading historical fiction, free verse and are avid readers.

I wanted to let you know how much I appreciate your time and commitment to reading and reviewing Karma. I'm not familiar with your site and I was just delighted to see the scope and breadth of the books. Of course, I am delighted that you found Karma captured the real terror and chaos of that historical time and that Sandeep was humorous and honourable. I will confess that I agonized long over Sandeep's character. Anyway, I couldn't be more pleased with the space you gave to Karma particularly showing how the poems cover the page. Karma is an unusual book with an unusual format and it needs to be recommended in order to find its readers. You have done exactly that for me. And I thank you.

Hi Cathy
I've added your novel to our library's identity booklist which is used for the Grade 9 English class.
I was very touched by the circumstances of Mata's suicide. As a Canadian whose ancestry is that of one of the founding countries of Canada (French) I felt it was very realistic how an Indian immigrant might feel completely isolated upon coming to Canada. We tend to blame the immigrants but often it is also the fault of us Canadians. We don't reach out to newcomers here as much as we should.