between shades of gray by Ruta Sepetys

Between Shades of Gray is a brilliant fictional account of the Lithuanian deportation of June 1941. This historical event is almost unknown within North America. It isn't studied in history classes and a quick scan of modern university and high school texts make no mention of the deportations. This year marks the 70th anniversary of the first of several deportations during the Soviet occupation of Lithuania.

In 1939, the Soviet Union and Nazi Germany signed the infamous Molotov-Ribbentrop Pact. This was an non-agression pact in which the two countries agreed to remain neutral if the other was attacked by a third party. But more importantly the pact contained a secret protocol by which Germany and Russia would divide up Poland and the Baltic states, Estonia, Latvia and Lithuania should country boundaries be rearranged. Finland, Estonia, Latvia and (later)most of Lithuania were assigned to the Soviet Union. In September, 1939, after the German invasion of Poland, the two countries (USSR and Germany) proceeded to carve up Poland as per their agreement. The secret protocols were redefined later that year, assigning Lithuania to the Soviets. 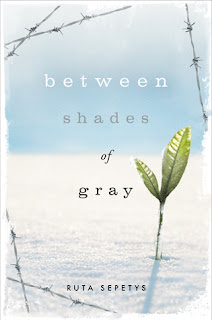 In June 1940, the Soviets invaded the Baltic states, removed the governments and installed puppet governments who took their orders from Moscow. Once the government was replaced, the Sovietization of these countries immediately began. Stalin ordered the creation of lists of enemies of the people. These lists included military personnel, doctors, lawyers, teachers, librarians and artists. Thousands of Lithuanians were deported to the Soviet Gulag in Siberia where they perished. These mass deportations occurred from 1941 to 1952 and involved up to an estimated 300,000 people. The men were sent to prisons where most of them perished while the women were sent to work camps. The first deportation occurred on June 14, 1941. It is this deportation that Between Shades of Gray explores.

The story of the deportation is told in the voice of fifteen year old Lina who is preparing to attend art school. Between Shades of Gray opens with Lina settling down to write her cousin Joana a letter. The evening breeze is gently coming in her bedroom window, carrying with it the scent of lily of the valley. In a moment her life changes forever as the NKVD (Soviet police) force Lina, her mother and her brother Jonas to hurriedly pack their belongings and leave. Lina's Papa has already disappeared. They are forced into a truck, taken to the train station and loaded onto stinking railway cars along with many others. What follows is a lengthy journey out of Lithuania into the Soviet interior to a work camp at Altai, near Mongolia. Lina and her family along with others suffer terrible deprivation and abuse. They see people die, people murdered and endure unspeakable conditions. After staying at this labour camp for months, Lina and her family are moved to an isolated camp at Trofimovsk located above the Arctic Circle on the Laptev Sea.

Lina's story is interwoven with flashbacks of life as she once knew it in Lithuania. Remembrances of a first crush, preparing to attend art school, her parents discussions of current political happenings are alternated with her narrative of the horrifying conditions she and her family endure in the labour camp. Lina becomes the voice of the Lithuanian people and their struggle to endure and survive. Her hope is to return to Lithuania as well as to one day be reunited with Andrius, a young man she met at the Altai labour camp.

Ruta Sepetys effectively captures the horrors of camp without being overly graphic. She also conveys the despair the Lithuanian deportees experience and the struggle of both Lina and her family to hope in the future. Their mother Elena is portrayed as a woman of dignity who refuses to treat Soviets with disrespect but who also refuses to do anything immoral. She is a stark contrast to the NKVD soldiers brutality and barbarism.

Below is a video of Ruta Sepetys explaining how she came to write her book.

I highly recommend this book to teens interested in reading historical fiction and to teachers for study in class.

Lithuanian Children in the Gulag by Tomas Balkelis
Posted by About me at 11:29:00 PM