Last Airlift: A Vietnamese Orphan's Rescue from War/ One Step at a Time by Marsha Forchuck Skrypuch 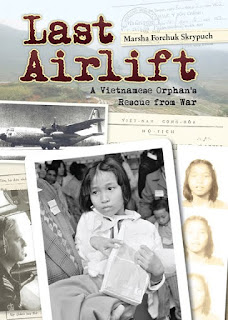 Marsha Skrypuch has written two short books for young readers that tell the story of eight year old Son Thi Anh Tuyet, a Vietnamese orphan who was adopted by a family from Brantford, Ontario. Living in an orphanage in Saigon, in 1975, Tuyet  had been crippled by polio when younger and was suffering from psychological trauma as a result of  her experiences during the Vietnam War.

With the fall of South Vietnam and its capital city, Saigon, to the North Vietnamese communists, the West began to evacuate children and babies from orphanages all over the city. Tuyet was one of fifty-seven babies and children airlifted out of Saigon and flown to Toronto Canada. This flight, on April 13, 1975, was the last to arrive in Canada. The children on this flight were not yet adopted. Last Airlift goes on to describe Tuyet's experience, leaving Vietnam and her new life with John and Dorothy Morris who adopted her into their family. Marsha Skrypuch intended to write Tuyet's story as a novel. Tuyet initially couldn't remember much of her early childhood, but as her memories resurfaced, Ms. Skrypuch decided to tell Tuyet's story instead. 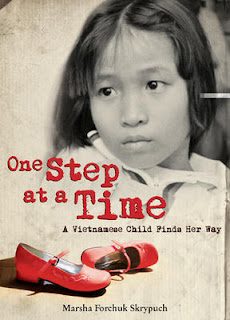 The second book, One Step At A Time, tells about Tuyet's struggle to have her leg, damaged and weakened by polio mended so that she would be able to walk again. Tuyet's surgery took place at the newly opened McMaster University Hospital in Hamilton, ON in 1975. At this time, parents could not stay with their children, and there were no translation services available to a newcomer to Canada,  like Tuyet. Skrypuch effectively captures Tuyet's confusion and fear at being left alone in a hospital for a procedure she didn't understand.
Eventually Tuyet begins to adapt to her new home and family, largely due to having regained the ability to be mobile and also due to the loving care of the Morris family.

Tuyet's early attachment to John Morris is truly endearing. One family picture with Tuyet's arm draped over her father's knee suggests that Tuyet immediately formed a close bond with the man who was the first father she had ever known. Tuyet was very blessed to have been adopted into such a loving family. Her two younger sisters treated her with kindness and repeatedly reassure her. They introduced her to the strange, new customs of her adopted country, Canada.

These two books will serve as a gentle introduction for younger children to an event known as the Fall of Saigon and also the Vietnam War. Skrypuch's books can also be used as the jumping point for children learning about the Vietnamese refugees who came to Canada in the mid-1970's.

Book Details:
Last Airlift. A Vietnamese Orphan's Rescue from War by Marsha Forchuk Skrypuch
One Step at a Time: A Vietnamese Child Finds Her Way
Pajama Press
Posted by About me at 10:20:00 PM

About me
A blog that focuses on young adult and juvenile fiction, nonfiction and some graphic novels as well as picture books. I'm interested in children's fiction that portrays historical figures and events. Because of my science background I also review some science nonfiction for children.

"Be kind, for everyone is fighting a hard battle."
Auggie Pullman in Wonder
“It doesn’t happen all at once,” he said. “You become. It takes a long time. That’s why it doesn’t often happen to people who break easily, or have sharp edges, or who have to be carefully kept. Generally, by the time you are Real, most of your hair has been loved off, and your eyes drop out and you get loose in the joints and very shabby. But these things don’t matter at all, because once you are Real you can’t be
ugly, except to people who don’t understand.”
The Velveteen Rabbit by Margery Williams
"I never look back darling. It distracts from the now."
Edna Mode, Incredibles