An Elephant in the Garden by Michael Morpurgo

This delightful little book, suitable for children between the ages of 9 to 12, is based on a true story about two children and their mother who escape from the bombed city of Dresden with a young elephant, in February, 1945. The story is told by an elderly woman, Lizzie, who is a resident of the nursing home where the narrator of the novel works as a nurse. 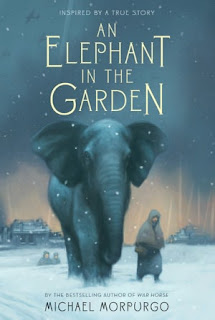 The nurse's son, Karl, has developed a friendship with the elderly Lizzie and she frequently tells him about how when she was a girl, she came to have "an elephant in the garden". At first Karl's mom is skeptical but on February 13, they find the old woman very upset in her room. When Karl's mom asks Lizzie if the date has any special meaning for her, Lizzie tells her that it was the day her life changed forever; "On February the thirteenth I am always sad. The wind in the trees, it makes me remember."

At this point they encourage Lizzie to recount the events some 65 years earlier. Lizzie who was known as Elizabeth then, her mother whom they called Mutti and her younger brother Karli, lived in Dresden. Elizabeth's father was a German soldier serving on the Eastern Front, fighting the Russians, while her mother worked at the zoo in Dresden. The people of Dresden worried about the bombing of their beautiful city, which so far had been spared. But the Allies where concerned that Dresden would be used as a headquarters to attack the advancing Russians and so there were rumours that a bombing was coming. Because of this Mutti and the staff of the zoo worried about what they would have to do to the animals should such a thing occur. They knew that all the wild animals would have to be shot. Karli was very distraught over this and Mutti hatched a plan to save Marelene, a young elephant.
One night Elizabeth and her brother, are surprised to see an elephant in the garden. Mutti has brought Marlene to stay with them at night. The young elephant has become increasingly distraught over the death of her mother and Mutti is trying to help the animal cope. 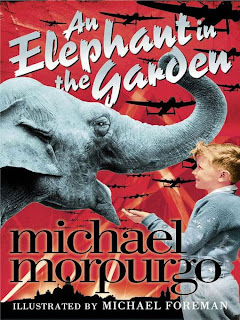 On the night of February 13th, Elizabeth, Karli and Mutti decide to take Marlene for a walk in a nearby park. When Marlene is enraged by a barking dog, she takes off after it, leading them away from home and the center of Dresden. Suddenly, they hear the air-raid sirens and soon after the bombers approaching the city. Too late for them to hide, Elizabeth, Karli and Mutti can only watch in horror as waves of Allied bombers fly over the city dropping incendiary bombs. With Dresden burning, they have no choice but to flee to the countryside to escape the flames. One of the strongest memories Lizzie has is of the burning, sucking wind that threatened to draw them back towards the burning city.

Eventually they do make it into the countryside traveling with the elephant seeking food and shelter and heading towards the west and safety. As a result of this journey, Elizabeth's family meets up with a downed Canadian airman hiding in a barn. This chance meeting changes Elizabeth's life forever.

An Elephant in the Garden is an engaging short novel for readers in the 9 to 12 age range. The are lovely ink and wash sketches throughout the book, which aid in bringing the story to life. But those wanting a story with a bit more depth will be disappointed. Morpurgo's style is unadorned and there is appeal in telling a story in this way.

Historical notes on this important event and a map at the beginning of the novel would have helped young readers immensely. The bombing of Dresden is an important and controversial historical event within World War II and some background material at the end would have added a nice touch to this book. That is part of the depth that is characteristically lacking in his books. Nevertheless, this story is a great introduction for young readers to an important event. 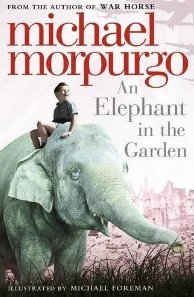 Book Details:
An Elephant In The Garden by Michael Morpurgo
London: HarperCollins Childrens Books 2010
233 pp.
Posted by About me at 11:59:00 PM

I liked this book very much. Its plot is very interesting. The best part is when they start bombing Dresden and Lizzie and her 2 children had to escape from Dresden with an Elephant, Marlene.. How did they manage to escape from Dresden with a Elephant!? The story is very interesting and i recommend everybody who is reading this comment to read the book An Elephant in the Garden.