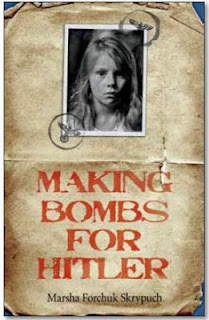 Canadian author Marsha Forchuk Skrypuch continues her historical fiction series for young readers, this time focusing on the little known slave raids conducted by the Nazis during the Second World War. Making Bombs For Hitler picks up the story of Lida Ferezuk whose kidnapping (in 1943 along with her younger sister, Larissa) by the Brown Sisters was mentioned in Skrypuch's earlier novel, Stolen Child. The narrator in that novel, Nadia Kravchuk, who is really Larissa, has a flashback remembering how she and her older sister were brutally taken from their grandmother's home in the village of Verenchanka, in the Chrenivets'ka region of the Ukraine. Making Bombs For Hitler backtracks, telling Lida's story from 1943 to 1951.

The novel opens with the two frightened girls arriving at a large building along with many other children. There they are sorted into two groups - those who will be slave labourers or Ostarbeiters for the Germans and those who will go into the Lebensborn program. Neither of them know what the two groups are for at that time. While Larissa is designated as Aryan and therefore suitable for the Lebensborn, Lida is shipped out of the Ukraine to Germany to become an Ostarbeiter. She is a mere nine years old.

Not knowing what has become of her younger sister, Lida must now face her fate along with many other young people, all the while worrying what has become of Larissa. Crammed into a cattle car with other Ostarbeiters, she is transported to Germany. She meets Luka Barukovich and fourteen year old Zenia Chornij both of whom are from Kyiv, as well as the very young Olesia Serediuk and Kataryna Pick.

When they arrive at the German factory, Lida quickly learns that to stay alive she must lie about her age and she must prove her usefulness to her German masters. Lida states that she is thirteen years old but when she is sorted into a group of younger children to be sent to the "hospital" she tells the officer that she is a good seamstress. She ends up working in the laundry and mending clothing and bedsheets. The fate of the younger children who are sent to the hospital,  is horrifying to Lida. The true desperation of her situation finally settles upon her. She is slave working to help the Nazis win the war, and that death might come at any time.

Lida is eventually moved from one factory to another, finally making bombs by hand for the German war machine. This is a task that both frightens her and fills her with shame; she wonders how many people will die as a result of the bombs she makes.

When the war finally ends, and Lida and her fellow laboureres are liberated, it takes many months for Lida to recover from her ordeal and some time before she learns her sister, Larissa's fate.

Making Bombs For Hitler is a well written, informative novel about this little known aspect of World War II. Skrypuch doesn't spare the reader any of the details about what went on in the camps or the suffering Lida and the other Ostarbeiters endured, but at the same time the book is not gruesome. Instead it is a poignant recounting of a cruel time in which many, many people suffered because of a terrible ideology. Skrypuch is able to convey the horror, the humiliation, and the loss many of these young people faced during the war. For many, their suffering didn't end with the war, as Lida's did. In a cruel twist of fate, many Eastern Workers who were liberated and sent back to the Soviet Union were not welcomed but instead sent to work camps or murdered because they were considered Nazis.


Lida is a strong character who evokes empathy and sympathy. It's hard to believe that she is so very young, for her voice is that of a wise, but terrified young teen. But Lida also displays courage, intelligence and a remarkable ability to find the beauty and good in small things. It is these qualities that help her and others to survive the degradation and brutality of the camps. When Lida is rewarded for her excellent work in the laundry, she selflessly uses it to help another girl, worse off than herself.

There are many supporting characters in this novel, one of whom is Luka, whom Lida seems to have a great deal of affection for. When he is injured in a bomb blast, Lida risks her life to know whether he is alive or not. And the ending of the novel suggests that these two have a future path to travel together, hopefully in the form of another novel!

The author also uses these supporting characters to portray the dignity some of the labourers brought to the camps despite being viewed as animals or spare parts for the German war machine. Whether it was older workers helping younger, newer workers adjust to camp life or sharing bread, many tried to retain their dignity in spite of the inhuman conditions.

Book Details:
Making Bombs For Hitler by Marsha Forchuk Skrypuch
Toronto: Scholastic Canada
186 pp.
Posted by About me at 9:39:00 PM

Thank you so much for the wonderful review!!