Sharon McKay's Thunder over Kandahar is the story of two Afghani girls, Tamanna and Yasmine, who have been brought together by circumstances beyond their control and who forge an enduring friendship that survives class differences, illness, war and separation. 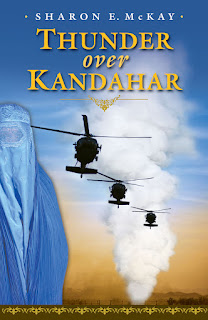 Yasmine and her father and mother have come back to Afghanistan, so her father (Baba) can teach and help his beloved country rebuild after the ouster of the Taliban. She misses England very much and has a difficult time understanding her father's "call back to the land" of his birth. Yasmine cannot comprehend all the social restrictions, and the poverty of Afghanistan. She wants to return to England. One day while she and her mother are out walking and singing in Herat, they are targeted by the Taliban who severely beat her mother. Yasmine's mother suffers a badly broken leg in the attack and is bedridden. Baba decides to move the family to Grandfather's home in Bazaar-E-Panjwayi, Kandahar Province. There they will live in a small village where Grandfather is respected and where they will be near the American FOB (Forward Operating Base).


It turns out that in this village, a young girl named Tamanna lives with her Uncle Zaman and her mother. Three years earlier, when her uncle was beating her mother, Tamanna tried to stop the assault and her hip was broken by a kick from her uncle. Tamanna is now lame. Her uncle instructs Tamanna to sell naan to a new customer from Herat who is wealthy and important. That customer is Yasmine's father. Soon Baba requests that Tamanna become a companion for his lonely daughter, Yasmine.


The two girls get along wonderfully, despite a language difference. Yasmine speaks English, French and some Dari, while Tamanna speaks both Pashto and Dari. Yasmine teaches Tamanna English, and Tamanna returns the favour by teaching Yasmine Pashto. They also study arithmetic in the afternoon and learn about the history of Afghanistan from Baba. Eventually the new school, built by the Americans is opened but on the first day of school, it is attacked by the Taliban, who injure Yasmine and threaten the teacher.

Then one day Baba has to take Yasmine's mother to the FOB to be treated as she is now very ill. He tells Yasmine that she cannot come but that they are planning to leave Afghanistan after her mother is treated by the American doctors. Baba has decided to return to London, as the situation is worsening quickly because of the Taliban insurgents. However, on their way to the FOB, their cart is attacked and both parents seriously injured. They are flown to Kandahar for treatment, while Yasmine is slated to follow them in a car hired by the Americans.

Meanwhile, Tamanna is to be married off to a older man to pay off her uncle's drug debts - a prospect that horrifies her. She is also very sick and losing weight, but she knows she is alone and there is no one who can help her.

Their lives intertwine once again when Yasmine, who is to be sent to Kandahar to meet up with her parents, does not forget Tamanna in her need. However, all does not go as planned for neither Yasmine nor Tamanna. Fleeing for their lives, their new found friendship is tested over the next few weeks as they struggle to leave Afghanistan.


This well researched novel presents what I consider to be a very accurate picture of life in Afghanistan during the Afghan War. McKay provides the reader with interesting tidbits of background history of the country, insights into the culture, how Westerners are views by the Afghan people and the views of the Taliban insurgents.  Some of the problems touched upon in this novel include the abuse of children by the Taliban, the crushing poverty of the country, the terrible abuse of women, the opium addiction problem which decimates many impoverished tribal villages, and the cooperation of the Americans/UN with the country's warlords.

Yasmine's parents are well educated Afghanis who hope for a modern and moderate society. Yasmine represents the Western outsider who doesn't know or understand the culture and Tamanna is typical of many Afghani who hope for a better life, especially for women. McKay very effectively conveys the hopes and aspirations that both young and middle-aged women in Afghanistan have for their lives, for the families, and for their country. Both girls are courageous, and selfless - willing to pay the ultimate sacrifice for one another.


There is a large cast of characters in the novel but these are introduced one after another with relative ease, and are easy to keep track of. McKay lets the reader know what happens to all the major characters over the years which adds a sense of closure to the novel. All the characters are realistic and well drawn and it is easy to empathize with all but especially the women and children who suffer so much.


Thunder over Kandahar is an excellent, suspenseful novel for young people interested in Afghanistan and who wish to learn more about the conflict and how it has affected the people of the country.


The author spent time in Afghanistan conducting research for this novel which was vetted by Muslims in both the West and Afghanistan and also by young teen readers.

It was my privilege to be present at Sharon Mckay's Skype visit to a Georgia School. Some of the students had listened to an audio version of Thunder Over Kandahar read by an actress.The students enjoyed Sharon's work and the opportunity to virtually meet her but their critical thinking skills were also challenged.
One student spoke directly to Sharon about how moved she was by the story( she'd read it herself) and how it had changed her life. These connections are what quality literature for children is all about.

where did you find the audio version? I would love for a few of my students to have access to it.

About me
A blog that focuses on young adult and juvenile fiction, nonfiction and some graphic novels as well as picture books. I'm interested in children's fiction that portrays historical figures and events. Because of my science background I also review some science nonfiction for children.

"Be kind, for everyone is fighting a hard battle."
Auggie Pullman in Wonder
“It doesn’t happen all at once,” he said. “You become. It takes a long time. That’s why it doesn’t often happen to people who break easily, or have sharp edges, or who have to be carefully kept. Generally, by the time you are Real, most of your hair has been loved off, and your eyes drop out and you get loose in the joints and very shabby. But these things don’t matter at all, because once you are Real you can’t be
ugly, except to people who don’t understand.”
The Velveteen Rabbit by Margery Williams
"I never look back darling. It distracts from the now."
Edna Mode, Incredibles