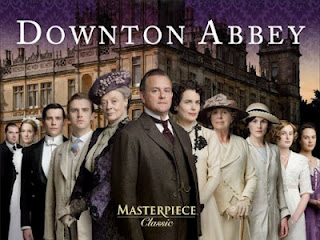 Downton Abbey tells the story of the Crawley family of North Yorkshire at the turn of the 20th century. The Edwardian mansion is the home and life's work of Robert, Earl of Grantham, his lovely demure wife, Cora, the Countess of Grantham, and their three daughters, Mary, Edith, and Sybil.

The series opens with the family dealing with the consequences of the sinking of the Titanic in April, 1912. Two male cousins, next in line to inherit the Downton estate have drowned, meaning the estate will now be passed onto the third cousin of the Earl, Matthew Crawley, a lawyer in London. This throws the entire family into a state of shock and consternation because they expected Downton Abbey to go to a more upper class relative. Complicating the matter is the fact that Cora, who is American, brought a large amount of money to the Crawley estate when she married Robert. This entail cannot be separated from the estate, which means that she too will lose all her money upon the Earl's death, unless this entail can be somehow separated from the inheritance. Since according to British law, neither Cora nor her daughters can inherit the estate, it means they face the possibility of financial hardship and it also means the daughters must marry well in order to maintain their status in British society. It's hard to believe such laws still existed in the early 20th century, but they did.

The Earl, accepting this situation and believing he has no recourse under the law,  writes to inform Matthew of his new situation in life, - that he will one day be heir to the lavish Downton Abbey.  Matthew and his mother, Isobel Crawley, move to Yorkshire where they are installed in a small house near Downton. Matthew vows such an inheritance and a move up in British society will not change him. At first the upper class Crawleys, especially Violet, the Dowager Countess of Grantham, try their best to dislike Matthew. But it is soon apparent that he is a good, intelligent man, who is willing to look into the matter of Cora's entail in the hope that some money can be rescued for the wife and daughters should they one day need it. In the meantime, Robert, Cora and Violet entertain the hope that Mary will marry Matthew and spare them all the possibility of losing Downton Abbey.

Into this setting, we follow the family through the next two years, until the beginning of World War I. Irreverent and disinterested Lady Mary behaves scandalously and despite efforts to conceal her misdemeanor,  rumours circulate throughout London about her ruined reputation. Middle daughter, Lady Edith, often passed over by men infatuated with her older sister, strikes back at Lady Mary with unexpected and heartrending consequences. And Lady Sybil gets mixed up in women's rights and politics while trying to help a lady's maid better herself.

Even more interesting than the Crawley family's feuds and foibles, is the shenanigans of the servants. Overseen by the butler, Mr. Carson, a stalwart and just man, the serving staff plot against one another, eavesdrop on the family, and try to cope with their own unique problems. There is the footman, Thomas, who is a most disagreeable character, and his partner in crime, the lady's maid Sarah O'Brien, both of whom are always plotting against Mr. Bates. The enigmatic Bates, a friend of the Earl, has a checkered past but now tries to be honest and live a clean life.

The entire first season's episodes are rife with characters in conflict, making the storyline interesting and mostly unpredictable. Downton Abbey is superbly cast, and fans of BBC period productions will no doubt recognize some familiar faces including Brendan Coyle (North and South, Larkrise to Candleford) who plays John Bates, Jim Carson (The Way We Live Now) as Mr. Carson, and of course, the incomparable Dame Maggie Smith who is brilliant as the Dowager Countess Grantham. Hugh Bonneville and Elizabeth McGovern are wonderfully complimentary as the Earl and Countess of Grantham.


Downton Abbey does a wonderful job of capturing the expectation of change that everyone seems to have. Women are expecting things will change for them - that they will get the vote, be allowed to work, and possibly even inherit property. Men seem to sense that things will change politically and of course there's the beginning of World War I. Downton sees the installation of electricity AND the telephone. Change is definitely in the air by the end of season one. 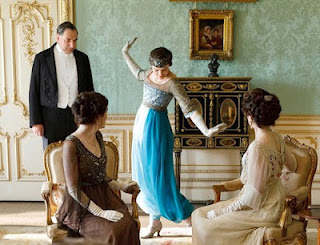 The series is worth watching just on the basis of the costuming alone. With four rich women to clothe, the possibilities are endless and their dresses are absolutely beautiful - detailed brocades, flowing silks and rich velvets. Sybil's amazing harem pants, were a stunning coup de grace that should have been incorporated into more than just one scene! The series won an Emmy for Outstanding Costumes for a Miniseries 2011.

Downton Abbey, created by Julian Fellowes, is a collaborative effort between Carnival Films of the UK and WGBH Boston (PBS) in the US.
The series is filmed at Highclere Castle in Hampshire, although the servants quarters are shot on a set in London.

Below is the trailer for the first season: