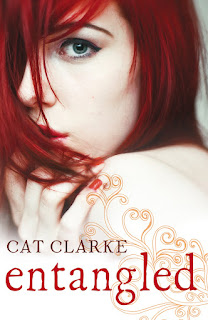 Entangled is the story of a life so tangled with psychological and emotional problems that the ending is almost a given. This story is told in the voice of seventeen year old Grace Carlyle. The novels opens with Grace going to a park with the intention of slitting her wrists and ending her messed up life. At the park, she meets a boy on the swings, named Ethan. She knows she just has to bide her time and he will leave and she can do what she came to do.

Eventually Grace passes out and when she wakes, she finds herself in a white room, with white sheets on a white bed in a hospital gown. There is a white table and chair with forty-seven BIC pens and paper. Ethan is also there and she thinks she has been kidnapped and is being held prisoner. Ethan's handsome and he seems to care about her. He takes the time to give her the food she likes and make her feel comfortable. But he also encourages her to write and to face the truth about her life.

So through Gracie's diary entries over the next twenty five days, we learn about her troubled life and why she chose to commit suicide. Grace alternates between her diary entries and her situation with Ethan in the present. As she writes, her story comes out as a first person narration, that is authentic and touching. We see a girl whose life is confused, filled with pain and self-loathing which she tries to numb through drinking; someone desperately seeking love in the numerous hook-ups.

Grace's life has been a difficult one and she has many problems. Her family relationships are seriously disordered. Grace's father abandoned his family by committing suicide and her mother who has also abandoned Grace by never being around for her daughter. Left alone for days by her uncaring mother, Grace becomes sexually active at the age of 14 and becomes promiscuous. She also begins drinking. Grace starts cutting herself at age fifteen and soon has many scars over her arms. When her friend Sal discovers that Grace is a cutter she is shocked. Their friendship takes a blow when Sal gets into trouble and blames Grace for her problems. But they eventually reconcile and things seem to go well for a time. Then Grace meets a boy, Nat, whom she falls for. They begin an intense sexual relationship, as Grace is a needy girl who equates sex with love. Grace manages to stop cutting herself during her relationship with Nat but when she relapses, Nat feels that this is more than he can cope with. They fight and then decide to try to mend their relationship. But when Nat's brother, Devon, leads Grace to discover something about Nat, this betrayal sends her over the edge, out of control and she decides to kill herself. The ending of the novel tells us what has happened to Grace. It is both tragic and heartrending.

In Entangled, Cat Clarke has effectively captured the life of a certain segment of teenage culture in Britain (and elsewhere); girls without fathers, girls who have disinterested or preoccupied parents, girls who act out through promiscuity and self harm and are desperate for love. As such, Entangled is not a happy read, but it is a fascinating one. It is depressing, sad, and the ending terribly tragic. Without proper guidance by her parents, and having no sense of what is right and wrong, making life choices based on what feels good, it's not difficult to see how Gracie's life slowly unravels into depression, promiscuity, self-harm, and attempted suicide. In this way, Entangled is a pyschological mystery that simply hooks the reader from the very beginning. We keep reading because we want to know how it all ends, even though we suspect we already do.

Grace is not a likable character. She is manipulative, angry, and needy. Each of her bad choices leads to a bigger problem, and yet she seems unable to comprehend this. In this respect, Grace is a typical teenager, lacking the skills or the guidance needed to navigate what is usually a very difficult period in life. But part of that is also her fault. She doesn't reach out to any adult, instead using her peers, who are also struggling, to help her. And near the end, when her friend Sophie offers to help her, Grace makes the choice not to tell her. "I nearly told her. So nearly. But I had to stick to the plan." The only aspect I found unrealistic was Grace being able to ace her final exams despite all the cutting, drinking, and promiscuity. Either she's very brilliant or the school system in Britain is incredibly lenient.

Through her diary entries, Grace eventually does realize what she's done and she's sorry. As Grace's "condition" changes, Ethan fades and dies away. The door isn't locked but all she has to do now is get out of the "room" she is in. He is her subconscious.

Clarke's ending is surprising, very innovative and is one of the greatest strengths of this novel. It is tragic and the reader is left hanging, wondering what will happen to Grace. As a parent I sometimes tell my young adults, "What is the worst thing that can happen?" when were are discussing how to make good choices in life. For someone like Grace, is there a fate worse than death? There just might be.

There is a great deal of British slang in this novel which can make it somewhat frustrating for North American readers. The large amount of graphic sexual content, swearing, and the disturbing cutting behaviour make this a book for more mature teens. Entangled is an exploration in teen life completely derailed.

Not a particularly great book trailer, but the music is quite interesting:


If you enjoyed Entangled and would like to learn more about this author, you can visit her website.