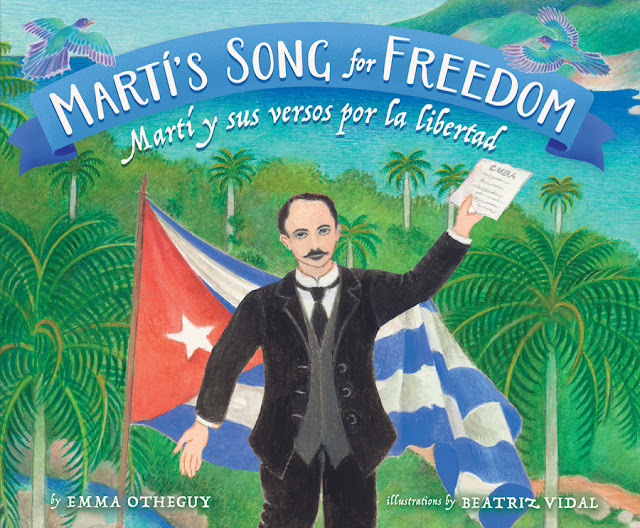 In this picture book, Jose was a young boy who loved  the countryside of his country Cuba. However, Jose was disturbed when he saw people enslaved by the wealthy land owners. These people worked cutting the sugar cane in the fields.

Jose had learned about the Civil War in the United States which ended slavery in that country. He knew the people enslaved in his own country should be free too and he wanted to abolish slavery in Cuba. However, Cuba was ruled by Spain and the Cuban people were not allowed to be a part of the government so they had no say in how their island was run.

In 1868, Cubans began fighting Spain for independence and to gain control over their country. Jose was too young to fight so he used words, in the form of pamphlets that he handed out. For this he was taken away to jail and sentenced to forced labour in a quarry.  Eventually he was freed but on the condition that he leave Cuba. But Jose Marti would never stop fighting to free his beloved Cuba.

Emma Otheguy's picture book, Marti's Song For Freedom portrays the life of Jose Marti, an important human rights activist and Latin American intellectual. Marti was born in 1853 in Havana, Cuba, to Mariano Marti Navarro and Lenoro Perez Carbrera. He was the eldest of eight children, having seven younger sisters. When Marti was twelve-years-old, he attended Escuela de Instruccion Primaria Superior Municipal de Verones which was run by Rafael Maria de Mendive who would become an important influence and mentor. His best friend was Fermin Valdes Dominguez, whose family owned slaves.

Marti enrolled in several schools but in 1867 he was studying at the San Pedro school for his undergraduate degree.  What would become The Ten Years War, a decade long struggle for Cuban independence, resulted in the formation of many groups supporting the war. Marti became a strong supporter not just of Cuban independence but also of the emancipation of of slaves. He expressed his views in poems, some of which were widely published. In 1869 when he was only sixteen years old he was arrested for his political involvement in the war against Spain.

Deported to Spain, Marti earned an M.A. and a law degree from the University of Zaragoza in 1874. He continued to be politically active, publishing many political essays. He returned to Cuba in 1878 but was once again exiled back to Spain.Marti travelled to many different countries including Mexico, Guatemala, and the United States and Venezuela. In 1891 he wrote Versos Sencillos (Simple Verses) which is quoted throughout Marti's Song For Freedom.

Marti continued to grow more and more politically active and eventually began organizing an armed Cuban revolution to gain the country's independence. He returned to Cuba in 1895 and died in the Battle of Dos Rios leading a two man charge into battle when others had withdrawn. Cuba eventually gained independence in 1898.

Marti's Song for Freedom is Otheguy's debut picture book. Written in verse, in both English and Spanish, Otheguy crafts a fascinating portrait of Marti who is considered Cuba's first most patriot and poet. Otheguy presents Marti as a person sensitive at a young age to the plight of the Cuban people who were forced by the Spanish to work as slaves on their own land.  But while living in New York,  he also saw in Americans a blindness to the less fortunate, the poor and the homeless that surrounded them. His time in the Catskill Mountains brought him back in touch with nature and its beauty that he so loved.Otheguy's biography is enhanced by the colourful artwork of illustrator Beatriz Vidal who incorporates many symbols onto the pages containing text. For example, the verses telling about Marti sent to jail as a young teen feature a caged bird, and when he returns to Cuba one last time, Otheguy quotes a verse from Marti's poetry and an eagle is featured as a symbol of freedom and power.

Otheguy's verses are complemented with a few chosen verses from Marti's Versos Sencillos giving readers a sense of Marti's passion, his love for Cuba and the island's people, his appreciation of nature and his expressive poetry. At the back of the picture book Otheguy includes an Afterword which provides detailed information on Jose Marti's life as well as a Selected Bibliography. Lavishly illustrated with short verse, Marti's Song For Freedom is an excellent resource for young readers to learn about some of the history of Cuba, and to discuss the themes of equality, national independence and the right of people to govern themselves.