Maria Merian was born in 1647 to Matthaeus Merian and Johanna Sibylla Heim in Frankfurt, Germany. Matthaeus was a famous engraver who passed his exceptional talent onto Maria and her two older brothers Matthaeus Jr. and Caspar. Maria's father died when she was only three years old. Her mother remarried, to a painter named Jacob Marrel who taught Maria how to paint in watercolours.She did not learn to paint with oils because many Germany cities forbade women from selling oil paintings. 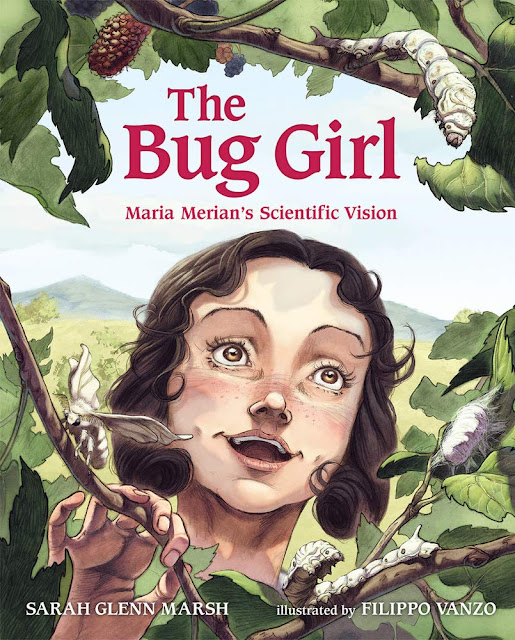 Maria married Johann Andreas Graff in 1665 and three years later gave birth to a daughter, Johanna Helena in 1668. That year they moved to Nurnberg, Graff's hometown. Maria spent time painting watercolours of flowers but during her painting of plants she began to observe the various insects on and around them. Her observations were captured in beautiful paintings which were also very accurate. Another daughter, Dorothea Maria in 1678.

In The Bug Girl, Merian is portrayed as a young girl who was deeply interested in the world around her. She observed the natural world, especially the plants, and insects that crawled and flew. Marsh explains that during this time the average person was very superstitious about the world around them. Very little was known about how insects came to be. It was widely believed that "creatures such as butterflies, moths, and frogs were born from mud puddles in a process known as 'spontaneous generation.' " Because of the belief that anyone interested in these creatures was likely evil,  Maria had to study them secretly, trying not to attract anyone's notice.

To understand how caterpillars came into existence, Maria studied silk worms which were the easiest to find. When the eggs hatched she learned by trial and error that they liked to eat mulberry leaves.She also learned that the silkworm caterpillars grew large enough, they formed cocoons which eventually opened to reveal beautiful white moths. Her work confirmed the conclusions Francesco Redi had reached in 1668, that spontaneous generation did not exist. Instead they went through a process now called metamorphosis.

Maria continued to observe and paint and also to teach other girls how to do the same. Eventually she and her daughter, Dorothea traveled to Suriname in South America on a scientific expedition. On this journey, at the age of fifty-two,  she would observe and paint many unusual insects. Maria was forced to leave Suriname after two years, due to ill health but she did publish a book of her observations that was well received. Maria passed away in 1717, leaving a legacy that has been rediscovered three hundred years later.

The Bug Girl brings to life the remarkable story of Maria Merian, a woman who broke the conventions of her time to observe and record the natural world around her. In the process Maria's work helped to dispel some of the superstitions common in the 1600's and contributed significantly to the field of biology. A unique feature of her beautiful, detailed paintings is that they featured insects in their natural habitat, portraying the plants and flowers that were key to their life cycles.  Her many paintings were published in various books including Blumenbach (Book of Flowers) in three parts, Neues Blumenbach (New Book of Flowers) which was published in 1680, Der Raupen (The Caterpillar) which was a book about the life cycle of the caterpillar, part I published in 1679 and a second book published in 1683.

Her work from Suriname was published in a book titled Metamorphosis Insectorum Surinamensium which was available both in colour and uncoloured. Despite the fact that she was a woman, her book was much sought after. Many of the plates of her illustrations were purchased by Peter the Great and now reside in St. Petersburg. In 2017, the 300th anniversary of her death in 1717, Merian's book on Suriname was republished, containing many plates of her art. Marsh has reproduced some in the front and back of her picture book.

Maria Merian's careful observations of insects, sometimes done overnight, meant that she captured aspects of the life cycle of insects that were not well known in the 17th century and early 18th century.  She recorded the life cycles of one hundred and eighty-six insects! Maria's focus was mainly on insects, although she also studied frogs, amphibians and reptiles.

While Marsh's text captures the essence of Maria Merian's contributions, the illustrations leave much to be desired, especially considering the beautiful detail of Maria's own paintings.  More attractive illustrations would like capture the readers interest and make this picture book biography more appealing.